The unique success story of Thonet has its roots in the middle of 19th century and started with the work of master carpenter Michael Thonet (1796-1871). He established the transition from manual furniture production to industrial production. In Vienna in 1859, Michael Thonet made his breakthrough to industrial production with chair No.14, later dubbed the „Vienna coffee house chair“, to which he applied the innovative technique of bending solid beech wood.

Once the individual steps of the furniture production were standardized and the division of labor was implemented, the next innovation consisted in making the chair a sustainable product that was easy to disassemble and could be shipped worldwide in a space-saving way. With his chair No.14, Thonet became a global player (for example, Thonet’s production peaked in 1912: that year, two million units were produced and sold worldwide) and numerous successful bentwood designs followed. 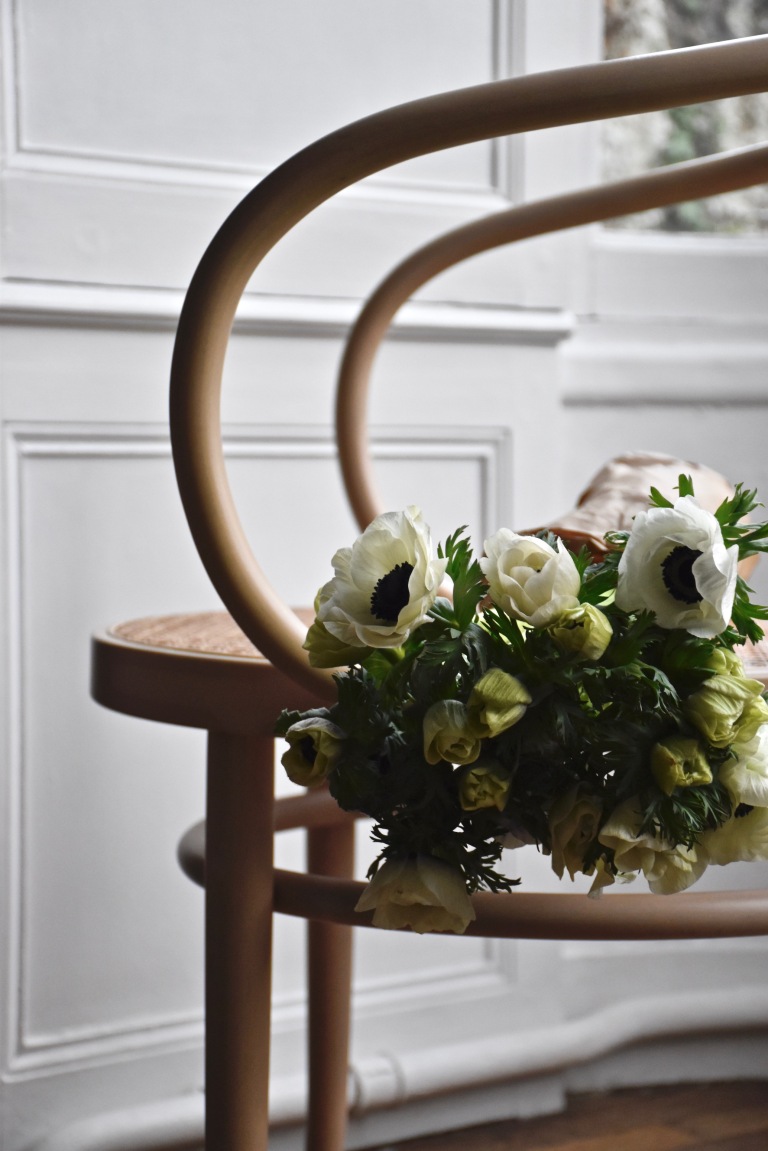 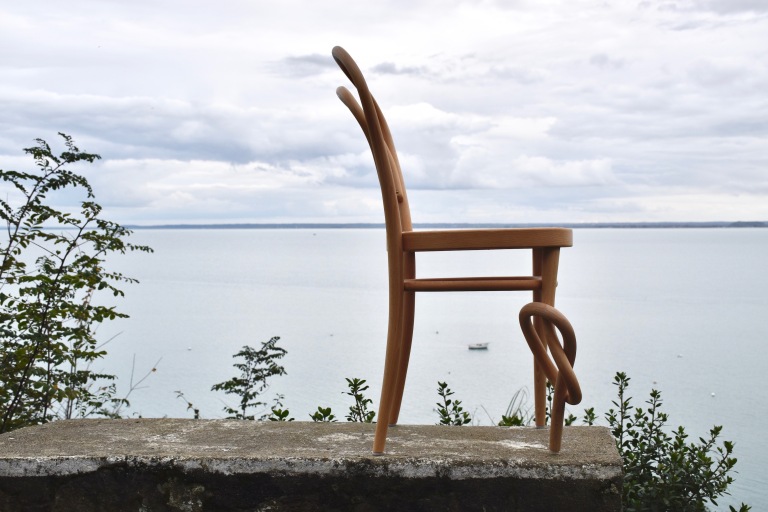 My very own Thonet story began in 2015 with a styling and photography competition organized by Thonet and Solebich (the largest German-speaking interior community). The task was to style a corner or a room with a chair, which the winner of the competition would later replace by his prize, a Thonet chair.

Only 10 out of 300 participants were chosen to receive a Thonet chair of their choice. I was deeply honored and very happy to have been among the winners of this great contest.

My winning picture was entitled „A room to dream“ by the jury. Et voilà, here is my picture. 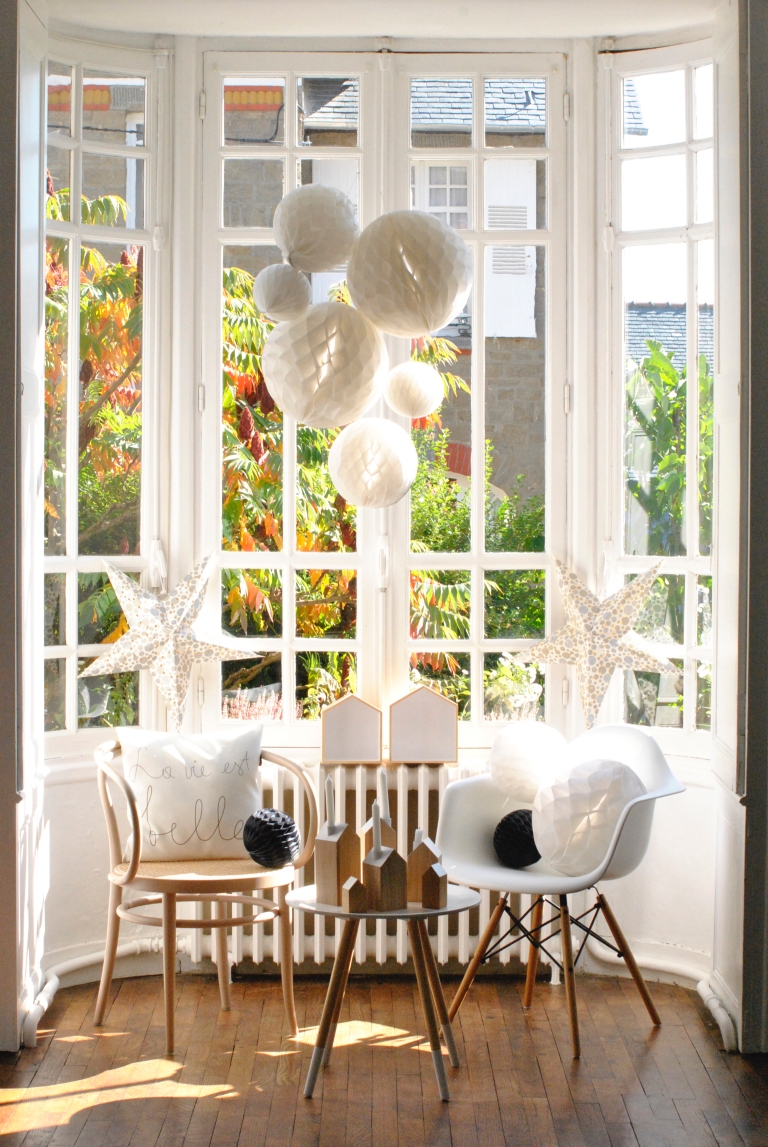 All ten pictures have exhibited in Thonet Museum in Frankenberg, Germany, since 2015. 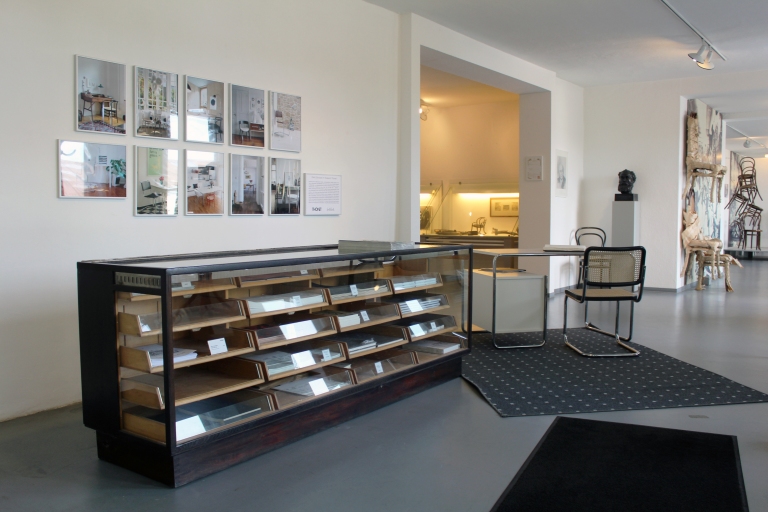 As a member of the famous Thonet Family, Philipp Thonet worked at the company as a responsible for product development and design. He was also specialized on exports, mostly for Canada and USA. Before this experience he worked as a freelance photographer in Texas. No wonder, because photography was his great passion since his childhood, as he got his first camera at the age of 12, an Asahi Pentax SLR. Many years after Philipp Thonet dedicates his time again to professional photography, which you can admire on his website.

I am very happy and honored that we have Philipp Thonet with us today. Thank you for this opportunity to learn more about the iconic Thonet furniture and the story of the company. 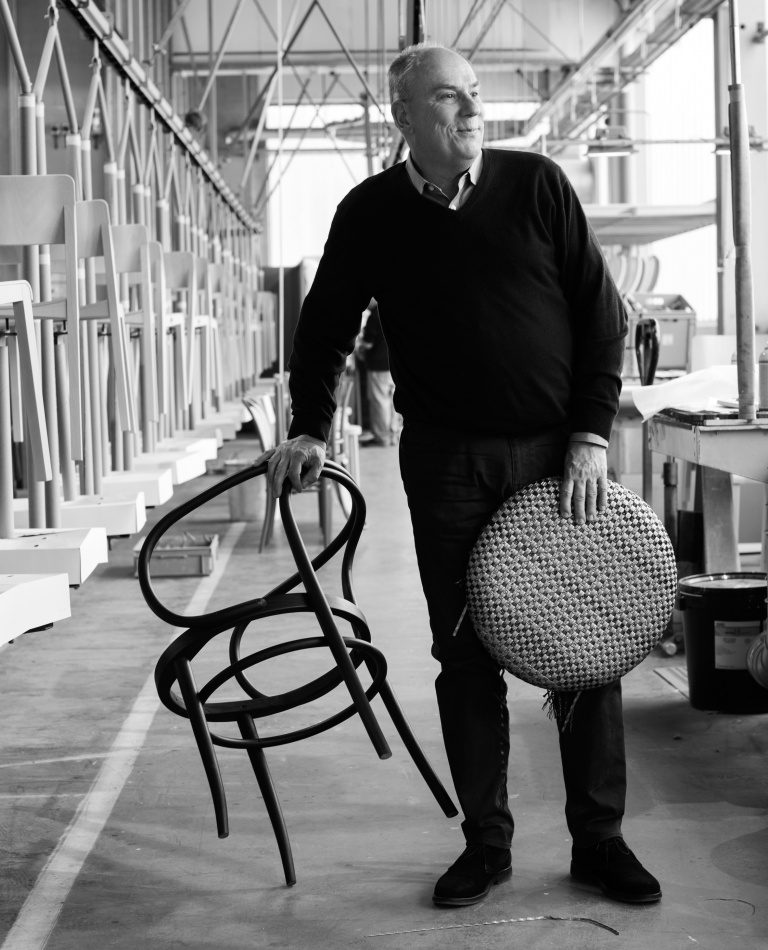 Dear Mr. Thonet, how is it for you to be born and grow up in a family which is the pioneer of producing the industrial furniture worldwide?

My childhood to me was not different than any other childhood. My family’s name did not hold any specific meaning to me nor was I aware that it did for others. I only really became aware of the relevance of my family’s history when I began working professionally. More and more people approached me about it and were interested in my family background. This is I when realized that there was an important story behind the name. 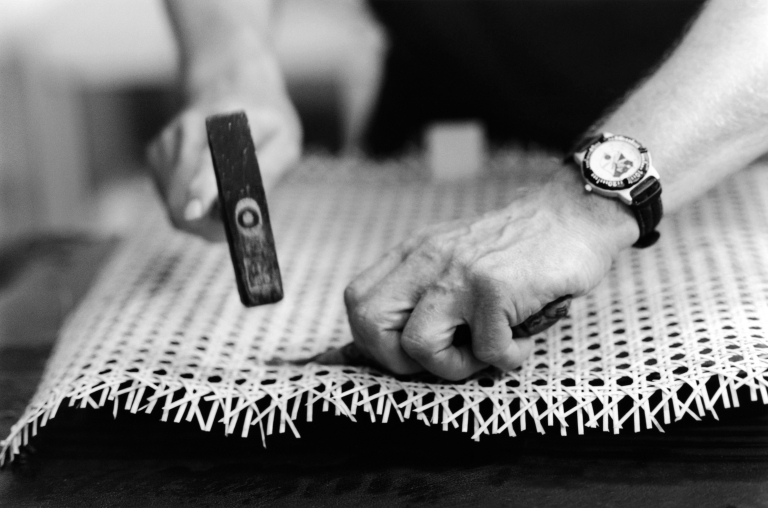 How would you describe Thonet in few words?

Thonet products are not only pieces of furniture, but actually pieces of design history. People come together on Thonet furniture ever since the company’s success story began in the great coffee houses of the 19th century.
With 200 years of company history and products that are always contemporary, Thonet stands for modern, timeless furniture (design). Pieces by Thonet are part of the everyday life of many people all over the world today as they were yesterday. Some appreciate them as classics with history and patina, others as timeless design icons with collector value and people of a younger generation see the style and culture it represents in a Thonet original.

Which is your favourite Thonet product you don’t want to miss in your home?

I have many different designs in my private home. But most of them are part of our tubular steel collection. Therefore the furniture in my house are more oriented towards the style of the Bauhaus.

My favourite piece of furniture is the S 32, designed by Marcel Breuer. This model, also known as the Cesca Chair, is named after Breuer’s daughter Francesca. 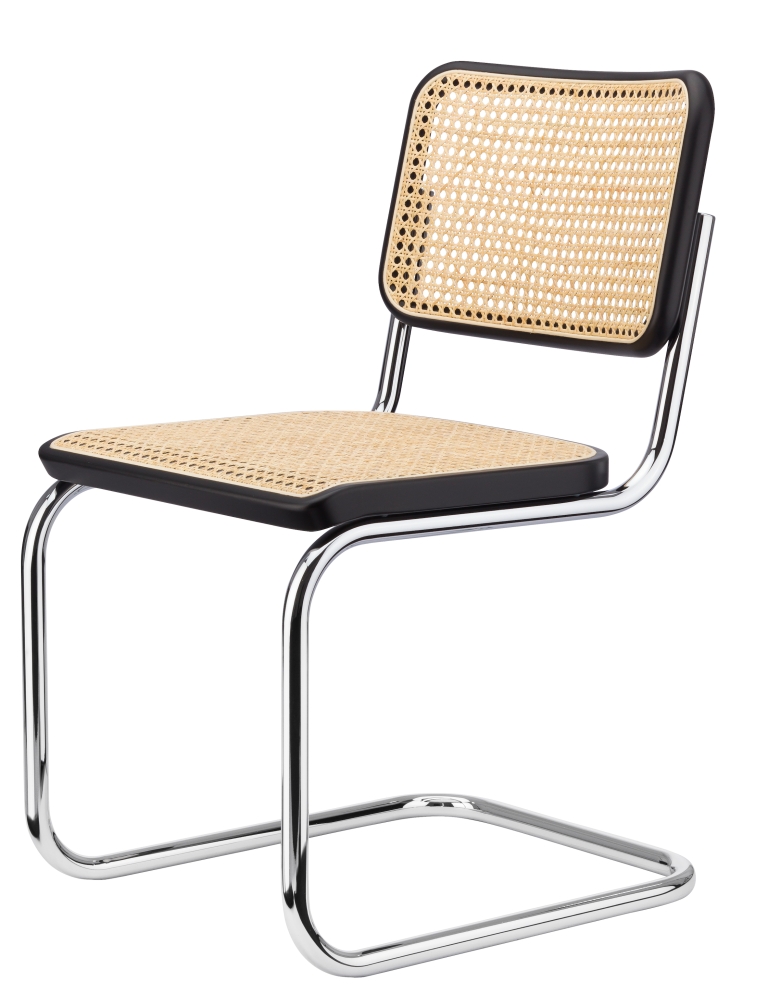 “Beside of bentwood furniture the tubular steel furniture is the second constant in Thonet’s product line. In the 1930s, the company was the world’s largest producer of this innovative furniture, which was designed by a number of famous architects including Mart Stam, Ludwig Mies van der Rohe and Marcel Breuer. Today, the early tubular steel furniture designs are considered milestones in design history. Their clear, open and simple forms were an expression of a new attitude in every-day culture and architecture, which became famous under the catchphrase “New Objectivity”. Currently, numerous successful classic models are still in the product line, among them the first cantilever chair S 33 for which Mart Stam was awarded the artistic copyright for its form and basic principle, as well as models S 32 and S 64 by Marcel Breuer.”

For me the „Knotenstuhl“ is the most unique piece of furniture ever! How did Michael Thonet get the idea to create this masterpiece?

The famous coffee house chair 214 is an icon and considered one of most successful mass produced products in the world to date, actually initiating the history of modern furniture production. Basis was a new technology – the bending of solid wood – that Michael Thonet developed earlier and perfected during the 1850s. For the first time a serial furniture production was made possible allowing large production numbers by using this new bending technique.
The 214 K – also known as the “Knotenstuhl” – takes the technique of bending solid wood one step further and adds a creative expression by implementing a knot into a leg of the chair. The product illustrates perfectly which new forms and unconventional shapes were made possible with the new technology of bending wood by the use of steam. 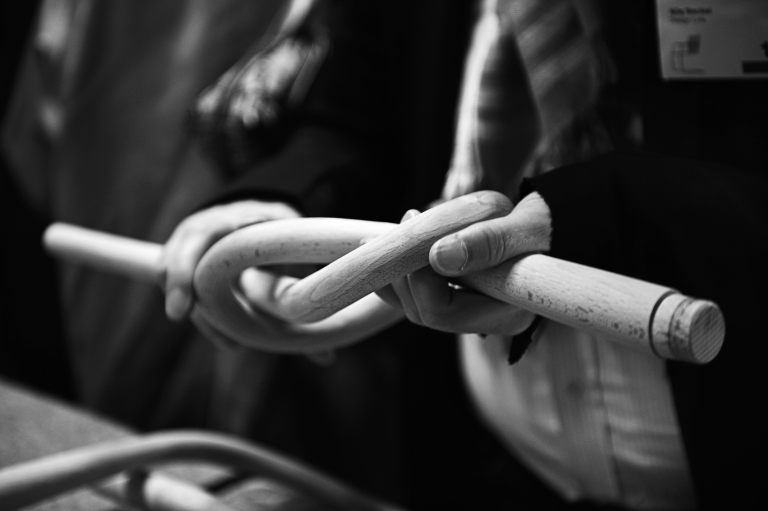 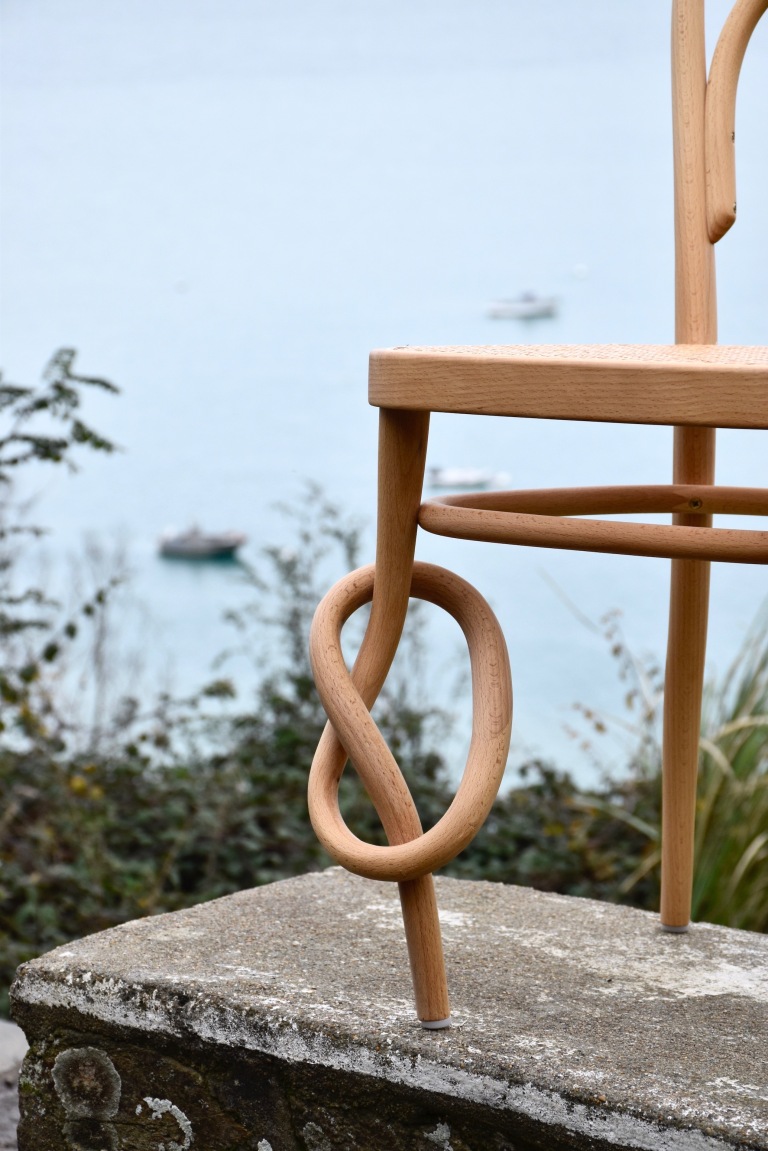 Thonet has a long tradition and for sure there are many interesting stories could be told. Which one is most special for you?

There are quite a few stories and anecdotes that are to be told about Thonet as a company and the personal involvement of my family it.
According to one legend, during the World Exhibition in Paris in 1889 Michael Thonet’s chair no. 14 fell from the restaurant of the Eiffel Tower – 57 meters to the ground – and survived the fall. The robustness of the chair was already proven by this remarkable incident.
For a more personal anecdote, I can vividly remember visits by renowned personalities at our house when I was a child. For instance, I witnessed meetings between my father and Mart Stam multiple times. 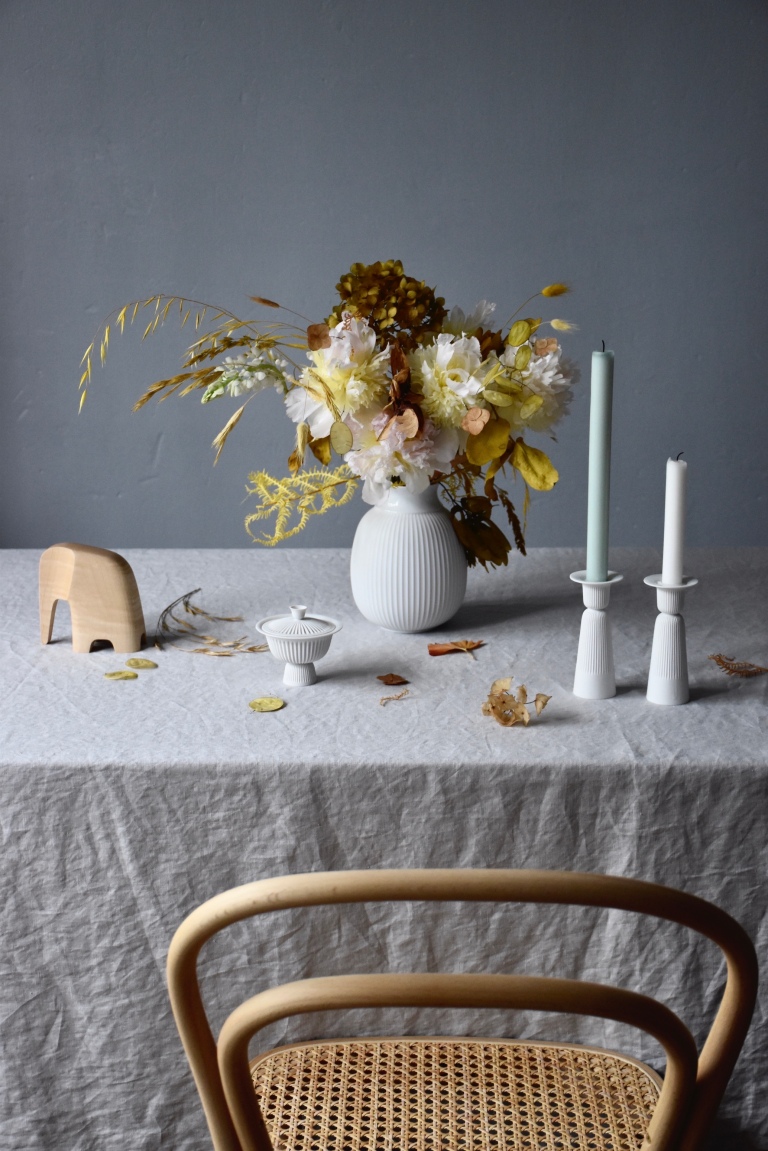 How do you see Thonet in the future?

Furniture pieces by Thonet have always been created by listening closely to the spirit of the time they are created in while also being timeless classics. They are companions that exemplify enduring value and cultural history for people throughout the world. To this day, renowned designers and architects design furniture for Thonet that have the potential to become distinctive classics. Thonet’s past heritage also represents a promising future: the development and production of authentic originals with a clear vision and high design standards, combined with the highest product quality to provide well-made long-lasting furniture. 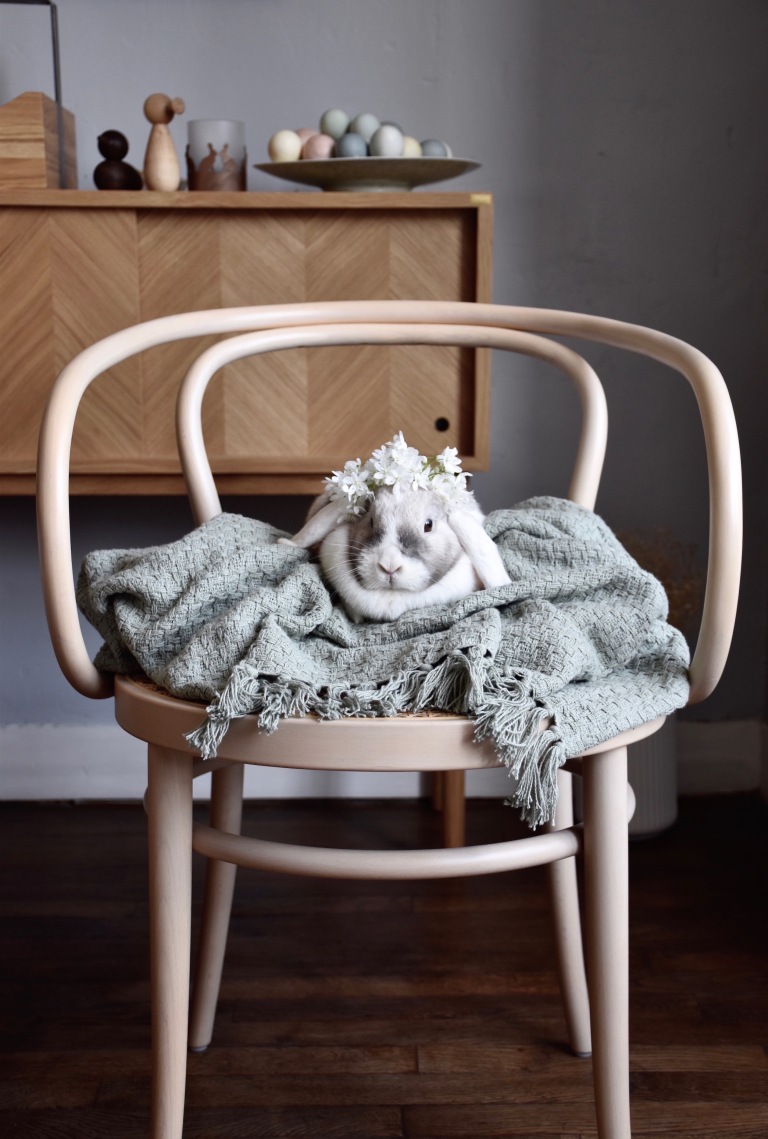 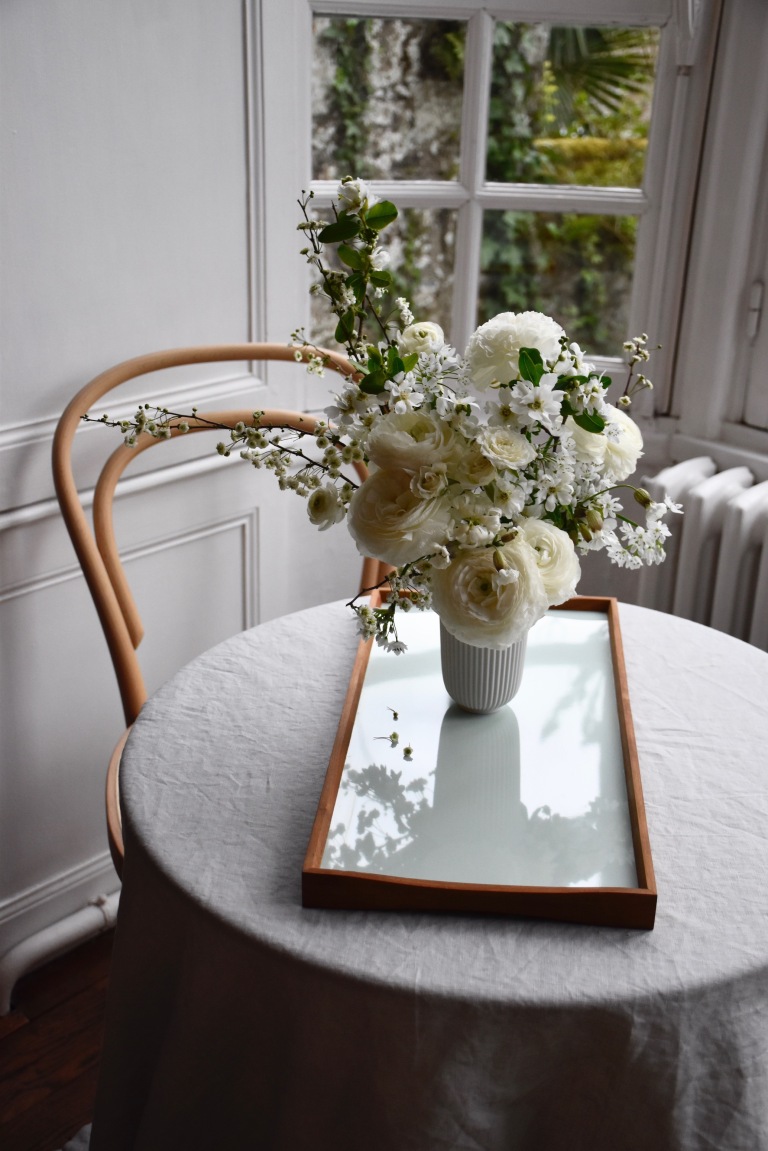 Thank you so much Mr. Thonet for these amazing insights and very interesting interview!

„With the invention of bentwood furniture, Michael Thonet laid the cornerstone of industrial production. He was born in 1796 in Boppard/ Rhine, where he opened his own workshop in 1819. In 1842 Prince Metternich summoned him to Vienna. Together with his sons he founded a company in 1849; within a short amount of time it became globally successful and expanded rapidly. More than 865,000 bentwood chairs per year were produced in today’s Czech Republic, Hungary, and Russia. Michael Thonet died in Vienna in 1871; his sons then took over the company.“ 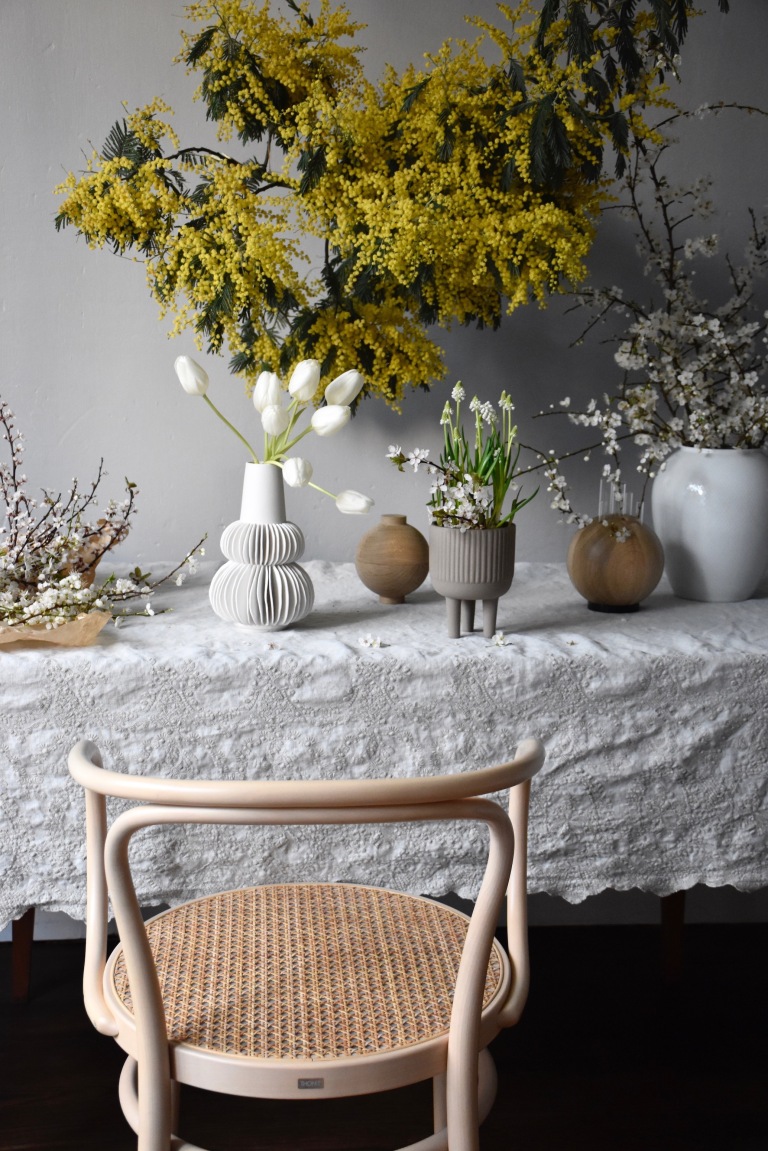 “50 million „Vienna coffee house chairs“ were sold till 1930 in the whole world! How it came to this great success? First of all the chair was not expense and could be comparable with 5 kg pork and 10 liter beer. Secondly because it consists of 6 parts, so it could easily piled up and shipped.” 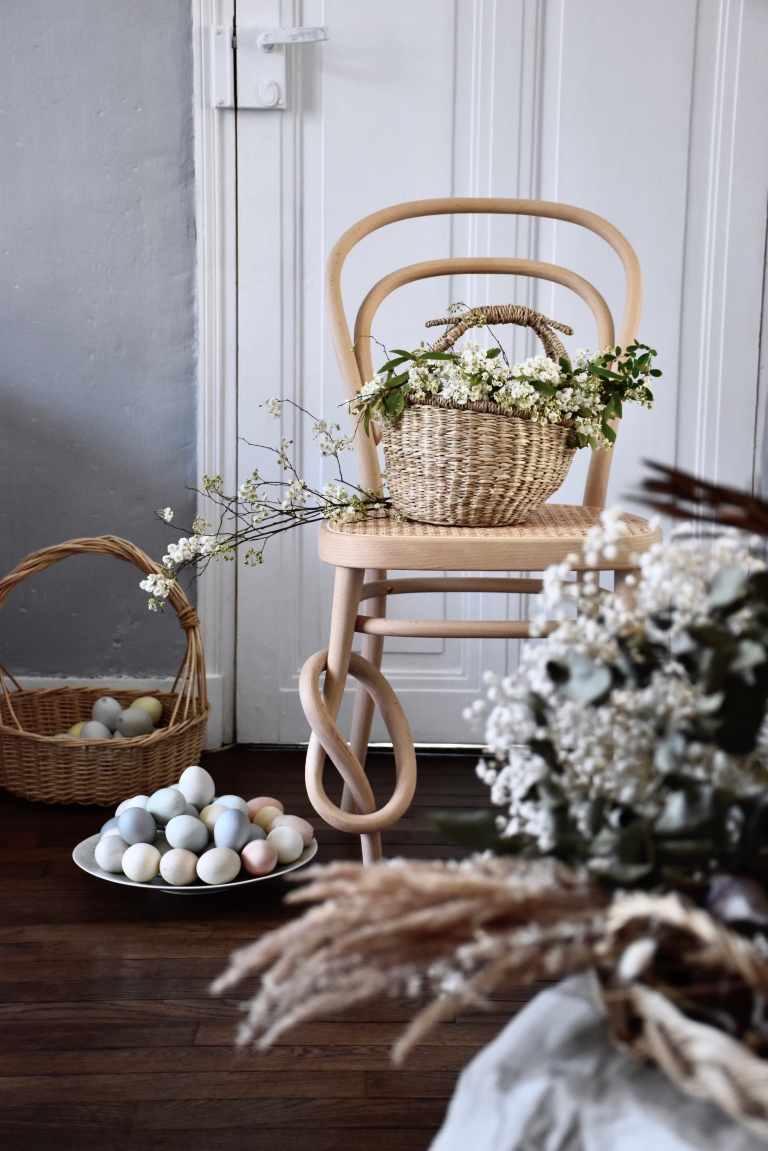 „Knots draw attention to memorable, noteworthy events. Think only of the knot in your handkerchief! The knot in the bentwood chair, indeed, calls to mind Michael Thonet, whose vocation was to create developments still unsurpassed in their significance. The knotted chair 214 K, then, stands as a sculptural symbol of some- thing unforgettable: the ingenious mind that succeeds in unravelling problems creatively and imaginatively. With its own, novel interpretation, this chair ties in with the famous original. The 214 K is both example and exponent of the chair that became the nodal point in a new era of epoch-making production technology: the 214.“ 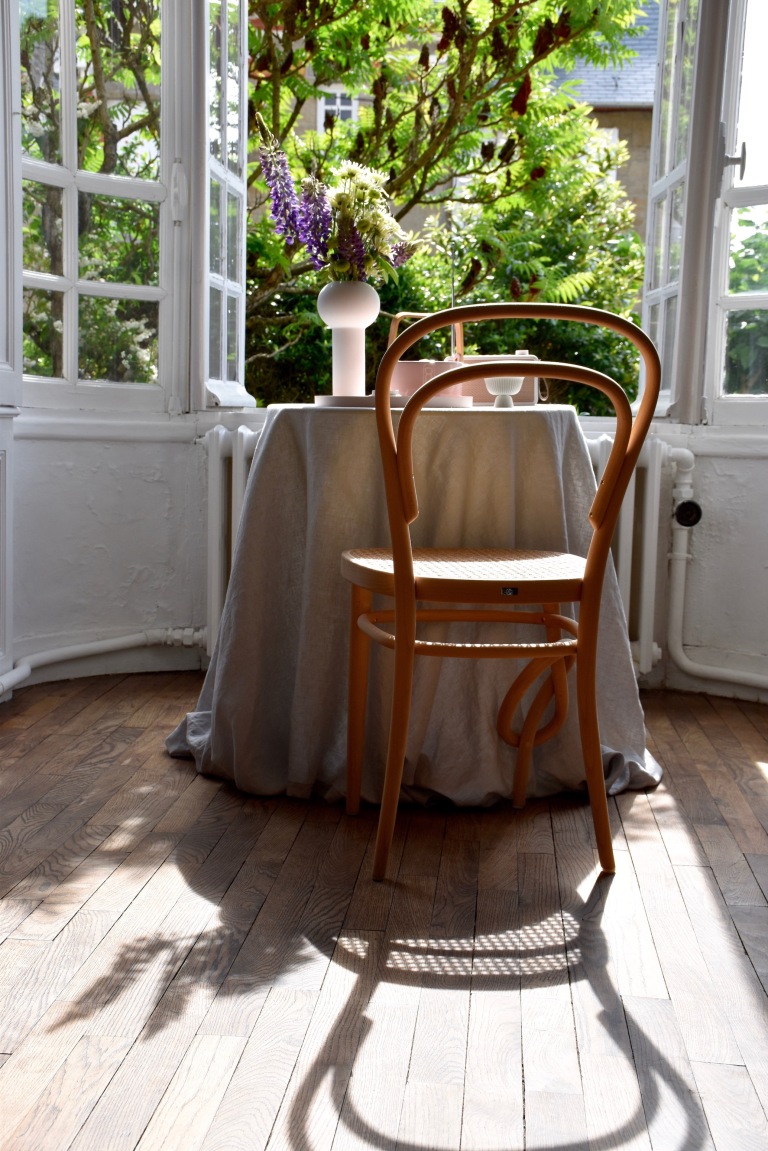 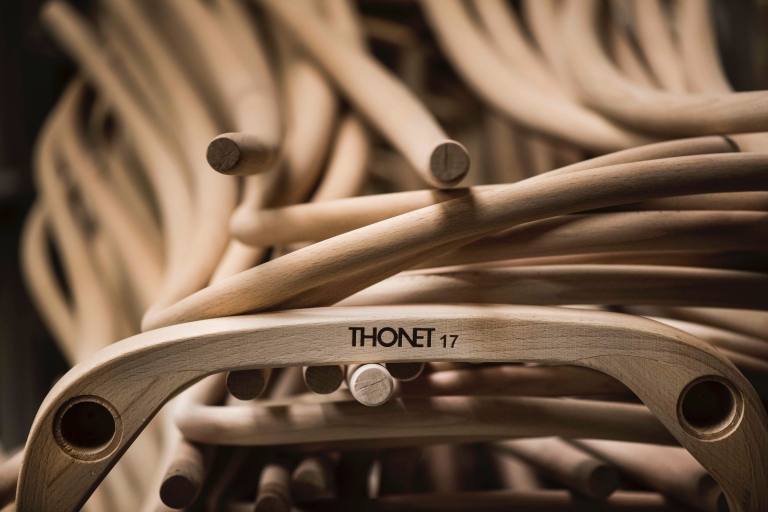 “Furniture pieces by Thonet have always been created by listening closely to the spirit of the time, they are created in while also being timeless classics. They are companions that exemplify enduring value and cultural history for people throughout the world. To this day, renowned designers and architects design furniture for Thonet that have the potential to become distinctive classics. Thonet’s past heritage also represents a promising future: the development and production of authentic originals with a clear vision and high design standards, combined with the highest product quality to provide well-made long-lasting furniture.” 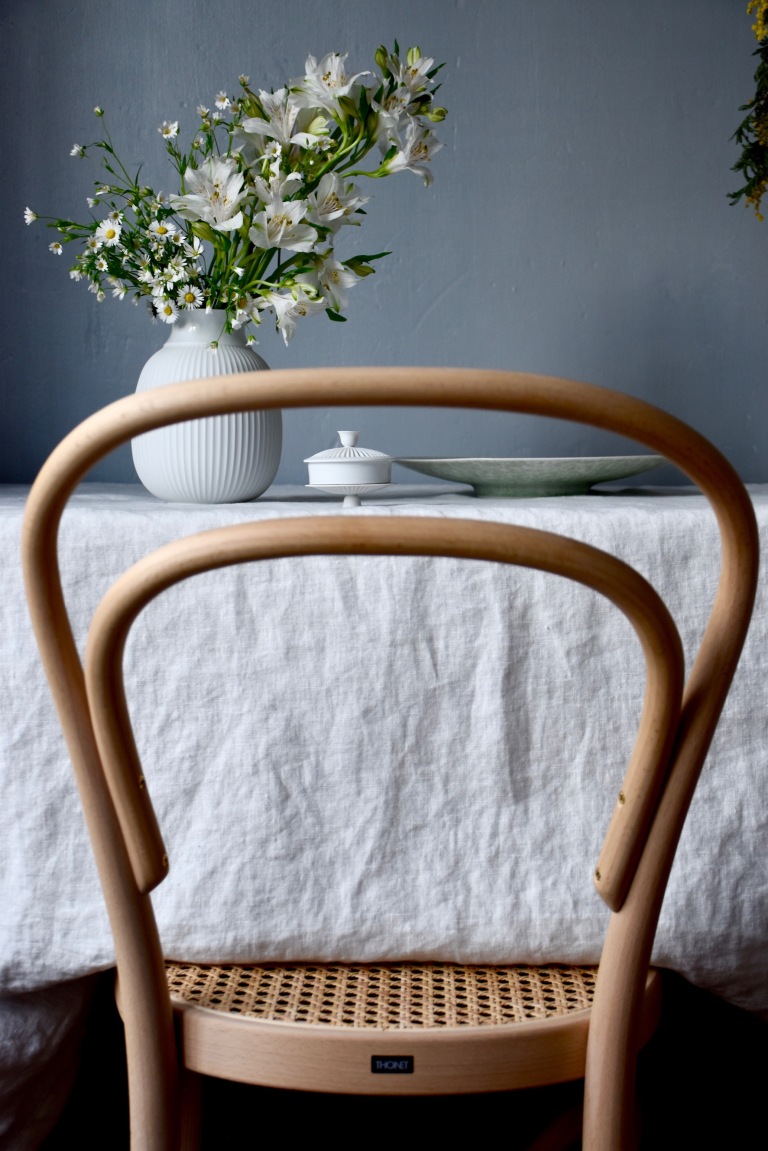 „Thonet still develops innovative products that stand out due to their quality materials and timeless formal language and always take sustainability and durability under consideration.“ 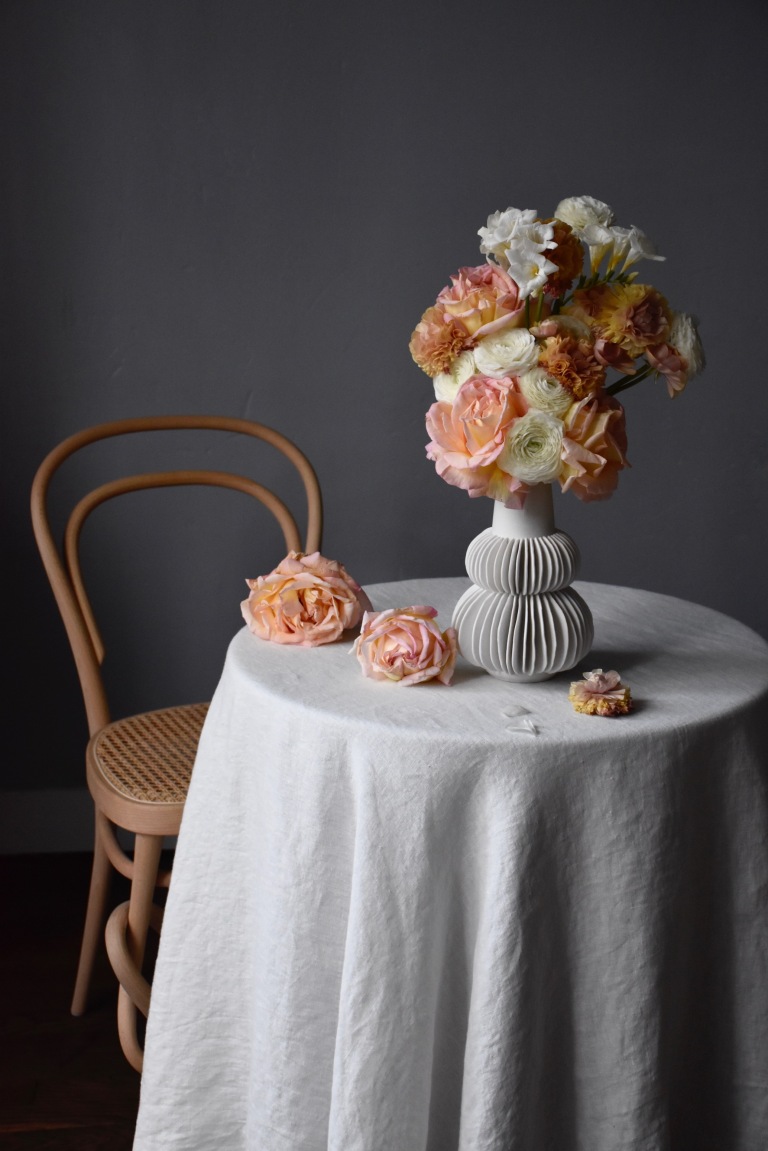 „Thonet is considered a pioneer of industrial design, and the chair no. 14 – today 214 – is considered the most successful industrial product in the world: it established the starting point for the history of modern furniture“

This portrait is a very special one for me. My appreciation goes to the whole Thonet Team, especially to Vanessa Funk for the beautiful pictures from Thonet Museum and her great support during the portrait preparations.

Last but not least I am very thankful for having this amazing interview with Philipp Thonet. Merci beaucoup!

In collaboration with Thonet